According to researchers, yoga is a rather effective method for treating neck pains. At the same time, it also provides additional benefits such as improvement in psychological well being as well as the quality of life. Normally, the cure for neck pains will be in the form of non-steroidal anti-inflammatory medication. Although it is effective, one may suffer from side effects such as nausea and dizziness. 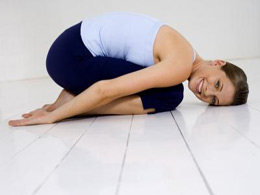 One type of yoga that has been proven effective in pain syndromes such as lower back pain is none other than Iyengar Yoga. This style of yoga makes use of props and the best part of it all is that the sequences of postures can be tailored to address an individual’s medical problem. However, there has not been any randomized controlled clinical trials published to test out how effectiveness lyengar yoga is for adults suffering from chronic neck pain.

Researchers from the Charite-University Medical Center in Berlin as well as other sites in Germany and Austria studied a total of 77 volunteer patients. They divided them into two separate groups, 38 of them were assigned to a yoga group while the remaining 39 of them were treated with normal exercise. Sadly, the dropout rate was much higher than they predicted. 24 of them either withdrew or were lost to follow-up, reducing the study sample to 25 patients in the yoga group and 28 in self-care exercise.

Both of the groups were instructed to complete a standardised questionnaire at the outset of the study, after four weeks and after ten weeks. According to the findings, it shows that there was a significant and clinically important reduction in pain intensity for those in the yoga group. Since yoga has the ability to tone muscles and release muscle tension, researchers believe that this relaxation response could have possibly helped to reduce stress related muscle tension and modify neurobiological pain perception.

If you are looking for Iyengar Yoga in Singapore, you can check out the private classes that we offer. At OMG Yoga Singapore, we try our best to cater to the various needs of each individual. This is why we derive a more personal class for this.