So who ever said that yoga is only suitable for humans? If you have heard of the term “doga” then you are still in the loop! Doga or dog yoga is basically practicing yoga with dogs. We are all aware that yoga provides us humans with multiple benefits. This goes the same for doga on dogs as they will surely benefit from the practice.

So how can dogs actually benefit from yoga? Well, by having a little more zen in their lives, these dogs will be more disciplined and interact better with humans. This is especially true for the K-9s living in Hong Kong. These K-9s are well known for their lack of acceptance of what we all know as “man’s best friend”. It is because of this reason that the Hong Kong government has to take action. They have to do their best to prevent these dogs from parks, apartment buildings, or anywhere near the workplace. In fact, there are many households in Hong Kong that support a strict no pet policy because of this. Hence, the dogs in Hong Kong have very few places that they can actually visit, which is rather pitiful. 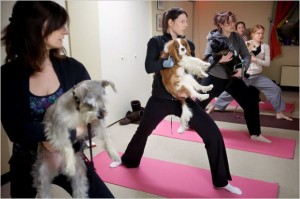 Doga originated from the states and it basically involves combining meditation and massage for both the owner and their dog. Since dogs have four paws, the yoga poses have to be modified. At times, some poses would require the aid of the owner in order for the dog to perform them. Take for example, the “upward dog” pose are for the two leggers and the “upward -paw” pose are for the four leggers. 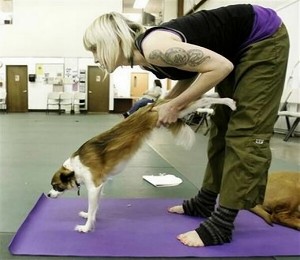 Suzette Ackermann, a South African native and Hong Kong’s first doga instructor, has been teaching humans the practice of yoga since 2003. When she was first approached by the owner of a boutique dog salon to teach yoga to dogs, she was in disbelief as she had never thought of that. However, the more she thought about it, the more it made sense to her. It was no longer as absurd as she had first thought. Suzette was aware that many dogs were used in various forms of therapy and healing practices, so she decided to develop a class especially for them. Although these classes may not be cheap, the benefits that both the owner and their dog receive will definitely be more than worthwhile.

Doga is not available in Singapore yet because the focus is still on yoga for humans. There are many individuals out there who have yet to experience a life change through yoga. Thus, we are still trying to spread the practice around our small island. If you would like to experience this change, then check out the various yoga classes that OMG Yoga has to offer!