According to researchers, women enrolled in a small study were reported to have a reduction in symptoms of post traumatic stress disorder (PTSD) after attending a series of yoga classes. However, the researchers also found that the women in a comparison group who did not take the classes also had a rather similar decline in the symptoms. 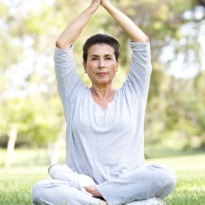 “The yoga group did well – they improved in their PTSD symptoms – and our control group actually did well, which we didn’t expect. I do emphasize that the yoga (group) definitely didn’t do worse. Yoga could potentially be triggering for people with trauma, so while that’s not as exciting a finding, I think it is important to say that,” explained Karen Mitchell from the National Center for PTSD at the VA Boston Healthcare System, who also led the study.

Approximately one in every ten women in the United States suffers from PTSD. Many claim that alternative and complementary therapies, including yoga, can assist in coping with the symptoms such as trouble sleeping and having flashbacks related to the traumatic event, otherwise known as re-experiencing. “It can be very debilitating and in the general population it affects women about twice as often as men,” stated Karen.

A total of 26 women with PSTD were involved in the study. These women had an average age of 44 and were made up of both civilians as well as military veterans. Fourteen of them attended weekly yoga sessions for 12 weeks or twice a week sessions for six weeks. Each of the session lasted for a duration of 75 minutes and focused on mind-body connections, breathing and physical postures. They were instructed to fill out a symptom questionnaire on a weekly basis. Twelve women in the comparison group also met weekly for 12 weeks in small groups to complete the same set of questionnaire. All the participants then completed a follow-up assessment a month after the sessions concluded.

Karen and her colleagues discovered that both groups shown rather significant improvements in their symptoms. For the yoga participants, there was a decrease in re-experiencing and hyperarousal symptoms. As for the controlled group, they were reported to have improvements in re-experiencing symptoms and anxiety. “There are several proposed mechanisms on how yoga may help reduce PTSD symptoms. Simply stated, yoga may regulate aspects of the endocrine system and the nervous system that are out of balance in PTSD. Yoga also reduces the stress response which plays a role in PTSD symptoms,” said Julie Staples, who had previously led a study of the same topic. For the rest of the story, you can read it here.

At OMG Yoga, we provide students with dedicated instructors. Our private yoga classes enables our instructors to personalise the class and tailor it towards your needs.