Many male individuals have this misconception that yoga is more of a girly exercise and that it is way too easy for them. The truth is that yoga is growing in popularity among both males and females. Some males just simply refuse to accept yoga as an exercise. According to Jaron Cumerford, a fitness club manager, this is just a method of covering up for the real reason that they choose not to practice yoga. 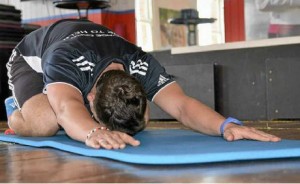 “For most guys, it’s because the girls will be better at it than them so the main thing is intimidation,” stated Jaron. He went on to mention that it was the smarter guys who usually participate in yoga. “The guys that are training and want to become a weapon do yoga,” he said. He also added that it was usually those who take their training seriously that will practice yoga as a form of recovery. The reason being that they are aware that yoga allows them to control the intensity of the practice as they desired.

“It’s not like a dance class – you go at your own pace and to your own ability. Yoga really is great for guys, especially if they play footy or other sport because it makes you more stable on the ground and improves flexibility so if you have to go for a big jump in footy, you can land a lot sturdier and can go higher,” he explained. Jaron remembered he once had a conversation with his mother when she attended a Bikram Yoga class in Brisbane. She noticed that there were numerous intimidating men in the class. However, she later found out that she had been training with the entire Broncos team. This is a clear example of how real athletes, who take their training seriously, aren’t afraid of attending a yoga class.

“Yoga is awesome – highly recommend it to anyone, especially sportspeople. Probably leave the tights at home though guys – shorts work fine,” said Alex Cutmore, Warwick Redbacks player, who took up yoga to improve on his agility on the Aussie Rules field. For more of the story, you can check it out over here.

OMG Yoga believes that yoga is an exercise suitable for both female as well as male students. For the male students, who might be embarrass or shy to join a group class, we have the perfect solution for you. Take a look at our Private Yoga Class, which will be conducted at the comfort of your own home.