Yoga For The Poor

For the past year and a half, Tabitha Farrar has been teaching yoga in quite a number of unconventional places around Boulder County in the United States. It was during this time that the laid-back 31-year-old started Angel Organic, her own nonprofit. Her mission is to provide yoga classes to under-served populations, meaning not just the middle-class women with gym or studio memberships. 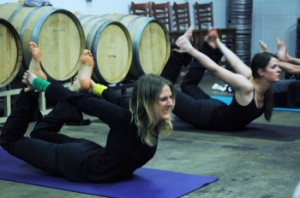 “Sunshine brought me to Boulder. And I saw that Boulder was so full of yoga studios and yoga teachers, but no one was teaching to those people who need it most,” stated Tabitha in her native British accent. According to her, yoga was her saviour from a devastating exercise disorder. She decided to reach out towards other community organizations with a similar goal of healing such as those involved with the homeless, veterans, cancer survivors, the disabled, victims of domestic violence and at-risk youth. The majority of such groups either do not have the habit of actively seeking out yoga or do not have the financial means in taking classes.

“We do community yoga classes that are open to the public and free,” said Tabitha after her long one hour of “beerasana” community class at Asher Brewing Company in Gunbarrel. Angel Organic conducts beerasana classes there on the last Tuesday of every month. She jokingly mentioned that the idea came about after her husband said that he would not be willing to take up a yoga class unless he could combine it with beer.

“We also offer yoga therapy, and those classes are private to the organization we’re working with, and tailored to them,” she added. An example would be when she holds classes for a class of teenage boys at Boulder’s Family Learning Center. From her experience, the traditional style of slow, meditative teaching wouldn’t work on such active individuals. “The first time I taught at the Family Learning Center was for a class of 14-year-old football players. I walked in the room and they were literally leapfrogging over each other — their energy level was through the roof. At first I thought, ‘I don’t know if this is going to work.’ Then I went straight into power yoga, and after about 20 minutes their energy dropped way down, and by the end I was able to do a three-minute meditation and they all actually did it,” she recalled. That was the moment when she realised that her goal of reaching out to people through yoga and meditation was very possible.

OMG Yoga would like to wish everyone a Happy Easter weekend and remind all that yoga can be tailored to anyone and everyone! To learn more about us, be sure to check out our website!