Yoga for the Elderly Comes with Benefits

Before she had begun practicing yoga, Irene Traenkle mentioned that she was not even able to reach her toes. Since then, the 70-year-old is now not only able to touch the floor with her fingers, but she is now also able to place her entire palms on the floor. Irene takes up Ashtanga Yoga at a class specifically targeted for those 55 years old and above. 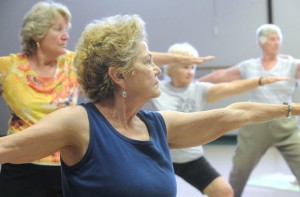 According to Cyndi Reichard, who is serving as a substitute instructor, it is perfectly alright to start doing yoga at the later stages in one’s life. She herself only begin the practice when she was 57 years old. “I was in very bad shape. I had lost my balance and flexibility from an injury. I felt like I was getting old very quickly after a life of fitness,” stated Cyndi.

Cyndi as well as many of her students agreed that yoga is rather helpful in the healing process after injuries. They added that some of the conditions yoga has assisted with include fibromyalgia, back injuries and a general loss of balance and flexibility. According to Cyndi, yoga has helped in her recovery after she had suffered from an injury. “It would have taken me so many months to get to the place I’m at now without yoga. “Within three weeks, I was doing pretty much what I had before. I don’t have my balance back completely, but I’m amazed at how quickly the flexibility was starting to come back,” she explained.

For most, starting yoga at an elder age might seem to be quite intimidating. However, the good thing about Cyndi’s classes is that she does her best to personalise her classes based upon an individual’s difficulty level or injury. In yoga, there are also many poses that enables variations. In other words, this will allow the individuals practicing to modify and take positions that they feel more comfortable with.

“Listen to your body. Don’t hurt it. Some of us are comfortable in ourselves and our own body … but a lot of us are more self conscious than that. I think for those people, it’s a lot easier to go with your own age group,” said Cyndi. For more of the story, you can check it out from here.

At OMG Yoga, our private classes are designed in a way so that any individual, with or without prior experience, can participate in. Our instructors will always do their best to tailor the classes so that it caters towards the student. Do refer to our private yoga class page for more information.