Yoga For The Brain

As we all know, yoga is known to offer many benefits. Based on a new study in Journal of Physical Activity and Health, the latest benefit is that yoga could provide a good work out for your brain. At the University of Illinois at Urbana-Champaign, researchers selected thirty undergraduate ladies to take part in a 20-minute Hatha yoga session. 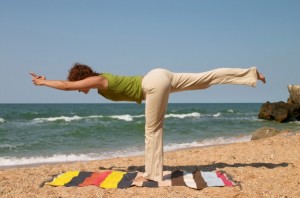 A total of three types of poses were performed by the participants: seated, standing and supine. The session ended with meditation and deep breathing. In order to make a comparison with other exercises, the participants completed a 20-minute session of aerobic exercise by either walking or running on a treadmill. The treadmill’s speed and inclination were modified so that each participant could reach 60 to 70 percent of their maximum heart rate throughout the session.

After each session, the participants were tested on their cognitive abilities. Participants showed greater accuracy and quicker reaction times after the yoga sessions compared to the aerobics sessions. In fact, there didn’t seem to be much of a significant increase in their cognitive performance after the aerobic exercise. This study shows that participants performed much better in speed and accuracy on tests of working memory and inhibitory control, which are two measures of brain function related with the ability to maintain focus as well as take in, retain and use new information.

“It appears that following yoga practice, the participants were better able to focus their mental resources, process information quickly, more accurately and also learn, hold and update pieces of information more effectively than after performing an aerobic exercise bout,” explained lead researcher Neha Gothe, now a professor of kinesiology at Wayne State University. He added that there could be many factors that explained the results. One of the factors is that mediation and breathing exercises are known to reduce stress which may result in stronger cognitive performance. Apart from that, increased self-awareness that comes with meditation could also be a factor.

“Yoga is an ancient Indian science and way of life that includes not only physical movements and postures but also regulated breathing and meditation. The practice involves an active attention or mindfulness component but its potential benefits have not been thoroughly explored,” she said. For more information on the research results, you can check it out here.

At OMG Yoga, we provide yoga classes in Singapore by only certified instructors. All of our instructors are recognised by the Yoga Alliance.