According to McMaster University, a study might prove the hypothesis of many yoga practitioners to be accurate. There are a number of individuals who practice yoga claiming that yoga can actually relief knee pain for people suffering from osteoarthritis. The idea of yoga being capable of developing joint strength may seem relatively straightforward to some. However, for others who experience daily knee pains, researcher Monica Maly explained that exercises such as hinges, lunges and squats can seem daunting. 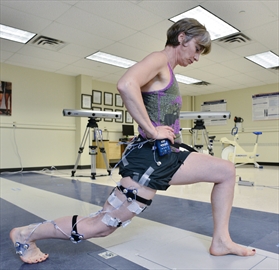 “Our goal was to design exercises for people with arthritis that are safe and well-tolerated. We wanted to be controlling pain but making sure people were getting something useful out of the exercise,” stated Monica, who works in the Mac Mobilize Lab. After getting into contact with De La Sol Yoga instructor Andre Grandbois, Monica’s group came up with a series of poses to focus mainly on proper alignment and avoiding pain. Aside from that, they also included yoga poses such as warrior, goddess, chair as well as other standing balance poses and hip-mobilisation stretches with the usage of a strap.

They offered up to four sessions each week for a period of 12 weeks to a group of 20 women with osteoarthritis. They were able to notice improvements in muscle strength and reduced pain in the group of participants. “It appears as though these exercises increase the activity of the muscles around the joint. Participants reported that they are experiencing pain less frequently, that they experience lower-intensity pain and that they are better able to get around,” said Monica, while noting that the study study focused specifically on reducing knee pain.

During the study, the participants’ muscles were measured for strength and activation before and after the exercises. According to Monica, strength “is the maximum torque produced by the muscle to move a joint … Activation refers to the electrical activity sent from the brain to muscles to cause the muscle to act”.

The results prove to be rather significant for some participants. “Before these classes, I looked like a 90-year-old woman getting out of bed in the morning. After every activity, playing baseball or golf, I had to ice both of my knees. Now I’m golfing, not icing my knees and not feeling the same swelling. It is amazing,” mentioned a 60-year-old woman. For more of the story, you can refer here.

At OMG Yoga, we have qualified and dedicated instructors ready to assist you. Our private yoga classes are designed in such a way to cater to each individual’s own needs. Do check us out today!