Tom Wojehowski, 62, is married with two sons, six grandchildren, a German shepherd puppy and Alzheimer’s disease. Just a few years ago, the signs started to show when he began repeating himself. In November of 2010, he was then diagnosed by a neurologist for mild cognitive impairment. From then on, it progressed further to early dementia. This resulted in him having to leave his job. 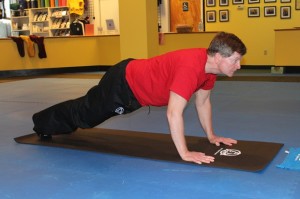 After leaving his job, he continued to remain busy at home by exercising and taking daily walks with his wife. After he was told that any form of exercise is good for dementia, he tried out yoga as he still had more than enough time for it. He first started out by using a DVD and he found out that he actually enjoyed it. Hence, we went to a yoga school for trial classes before officially signing up. He now attends yoga classes four to five times a week.

He did mention that there will be times when he didn’t feel like attending classes, but he would still continue to go for it. When he came back from it, he will always tell his wife that he was glad he went because it was great. He feels that yoga is capable of putting his mind and spirit in a different place. For every session that he attended, he will always be refreshed and energized. In fact, he never once regretted attending the class.

For Tom, he doesn’t really have a favourite pose as he likes them all. Due to his condition, he isn’t able to remember the names of all the pose. However, once he attends the class, all the poses will just come to him naturally. His advice to other individuals who suffer from dementia is to use their interest to the fullest. Instead of sitting around and worrying about what the future might bring, live on a day to day basis. As for those who intend to try yoga, he would like to remind them that it is mainly for inner peace. Building muscles and such are all secondary objectives. Instead, it’s the spirit inside where it truly helps. It allows your mind to get off from things that you shouldn’t be thinking about in the first place. To learn more about Tom’s story, you can refer here.

For those looking for yoga classes in Singapore, do check us out. OMG Yoga offers both private and group classes to cater to each individual’s needs.