Till this very day, Jim Tucker can still recall waking up after his intestinal surgery back in November of 2010. After he came around, he was informed by his doctors that his stomach was infected and that he had gone into septic shock. The doctors added that his limbs were not receiving any blood and they wanted to amputate them all. After they showed him his purple and numb arms as well as legs, his first thought was to amputate them immediately as the infection was spreading. 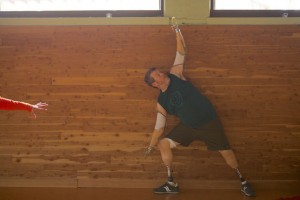 Seven months after, Jim was discharged with simple prostheses in the place of his limb, causing him to face an uphill battle. Although he was still able to continue working as an indoor horticulturalist, he had to basically relearn how to live his daily life. For the past three years, he has pick up on how to drive, walk and even play with his dog. However, he has been putting off one of his greatest former passions. “I had a pretty intense practice of doing [yoga] about three times a week. I just remember it being the best time of my life,” he stated.

It was something Jim had to forgo until he met Kate Dessommes, a yoga instructor who was working on teaching free “Yoga for Amputees” and “Yoga Warriors” classes to veterans. Initially, they began with a few short sessions at Jim’s home. After six months of practice, he decided that it was time to head back to the studio. Just last Sunday afternoon at Southeast Portland’s Yoga Union, he finally had the opportunity. After removing his “arms” and “legs”, he got into position on the yoga mat with help from Kate.

Kate began with several basic stretches to open up Jim’s chest and lengthen his spine. Then, she progressed to the more familiar poses such as the locust and warrior. With physical aids from a block, a blanket or a pillow, Jim was able to perform just about anything he wanted. Moving from pose to pose, Jim was able to build back his confidence and return to the practice he felt forced to give up. For the rest of the story, you can check it out here.

At OMG Yoga, we have designed our private yoga classes in a way so that it can be catered to different individuals’ needs. Ultimately, we want all our students to enjoy the practice while reaching their goals and gaining the benefits.