On April 23rd last year, Flora Migyanka was making preparations to pick up her daughter from the school bus stop. She received a call and on the other end of the line was a doctor informing her that she had breast cancer. It was the routine mammogram and a biopsy that established the unfortunate news for her. She was diagnosed with stage 1 invasive lobular cancer in her right breast. 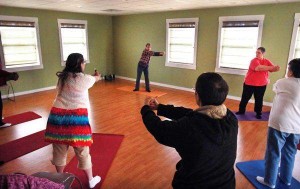 For the next few months after, Flora had to go through surgery to remove 11 lymph nodes and a double mastectomy with breast reconstruction. She will also be required to take the drug Tamoxifen for 10 years. “I honestly think — and I really don’t say this lightly — that the mammogram saved my life. Obviously, a mammogram doesn’t cure cancer, and I don’t know if I’m cured of cancer. But because I caught it at its earliest stages, the chances of it coming back are much lower than someone else who caught it at stage 3. I can’t advocate enough for women to go and get their mammograms,” stated the 42-year-old.

During this entire phase of hers, she has been practicing yoga and pilates to help her in remaining calm and relaxed. At the same time, the practice also assisted her in rebuilding strength in a body traumatized by cancer and surgery. “I had like 500 stitches. It was a long process of rehabilitating. It was very painful. There’s a lot more to it than people think with having surgery. It’s a major thing. I was very cognizant of everything and I was so determined to not let anything get in my way. I was just fighting to get back to where I was before, mentally and physically,” she explained after suffering from lymphedema, a complication from her lymph node surgery that causes fluid retention, swelling and pain. She also added that there was some muscle wasting in her back as well as arms and her shoulders were rolling forward.

Through yoga, it helped Flora to quieten her mind and focus on a daily basis instead of thinking of the future ahead. Aside from that, yoga also gave her body strength, flexibility and range of motion. On a whole, it is a major stress reliever. “Yoga is all encompassing. It helps your mind process any pain, and learning to let go and learning to accept things you can’t change and learning to love yourself and be content,” she said. For the full story, you can read it here.

If you are looking for yoga class in Singapore to help cope with specific injuries or health conditions, you can check out what we have to offer. OMG Yoga provides only certified instructors who can cater to each student’s varying needs.