Recently, a series of dynamic modified yoga classes, capable of aiding weight loss and rehabilitating injuries, is taking the local fitness scene by storm. The workout was first created in America by three-time WCW World Heavyweight champion, Diamond Dallas Page. Since then, it has made quite a significant impact on Bognor Regis’ Haydn Walden. He made it his goal to bring the fitness programme to the UK. At the same time, he was qualified to be the UK’s first DDPYoga instructor. 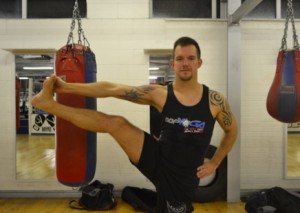 Haydn is always someone who likes a challenge. At just six years old, he was diagnosed with dyspraxia and suffered with hyper-mobility. However, this did not hold him back. During his childhood, he tried to play the sports that are popular among others, but it didn’t exactly turn out as planned. He was bullied due to his inability to run properly or catch a ball. “Sport became my nemesis. It was watching WWE and WCW wrestling which was the escapism for me. I loved it and I longed to look like those athletes,” he stated.

When he was eight years old, Haydn chanced upon drumming. Despite him being told that he shouldn’t be able to play the drums, he applied an ‘I can do anything if I work at it’ attitude and, before long, he had a career as a drummer. During his 20s, he was touring around as a drummer. However, he did suffer considerable knee pain when he was on tours. He was then diagnosed with under-developed quadriceps and treated with electro stimulation as well as strength-building exercises. He also developed a mindset to get fitter and healthier.

Over the next ten years, Haydn joined a number of gyms, practicing Muay Thai boxing and lifting weights, still inspired by WWE and WCW wrestling. Unfortunately, a few years in, Haydn faced some setbacks. After he sustained injuries to his right leg and ankle, it put an end to his martial arts training. That was the period when things started going downhill for Haydn. However, being inspired by Chris Jericho, his idol, he found out about DDPYoga. Initially, he had a rough start, but he persevere on. Through his hard work and dedication, he managed to become an official DDPYoga instructor. Now, he is spreading the craft to the rest of the UK. For more of the story, you can read it here.

At OMG Yoga in Singapore, we believe that yoga is suitable for everyone regardless of age, health condition or fitness level. We too, would like to spread our knowledge to as many individuals as possible. Hence, our private yoga classes are designed towards each individual’s needs.