During a mortar attack in Afghanistan, Army 1st Sgt. Chris Montera lost both of his legs above the knee level. Aside from that, over 60 percent of his body suffered from third-degree burns. Although it will take time to heal, he is progressing in the right direction. As of right now, he is already capable of doing a headstand with guidance from Sunny Keays, his yoga instructor. 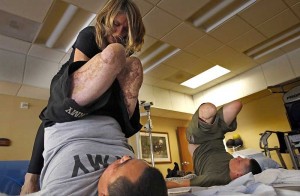 “It takes a lot of pressure off my back and spine. It helps with the pain,” stated Chris, who was on his fourth combat tour when he sustained the injuries. Chris isn’t the only vet who is taking up yoga classes for his recovery. Alongside him is Marine Sgt. James Bernard. The 25-year-old suffered from a severe case of post-traumatic stress disorder since his return from combat in Helmand province in Afghanistan. Currently, James is taking up yoga as well and going through a series of stretching, relaxing and breathing exercises. According to James’s wife, yoga is assisting her husband in regaining the composure and self-confidence that he had before he went to war. “He seems more aware now of who he is,” she said.

As more hospitals run by the military and the Department of Veterans Affairs are doing their best to aid military personnel in overcoming both physical as well as emotional wounds from the wars in Iraq and Afghanistan, they are turning towards alternative therapies such as yoga. According to military officials, yoga on its own may not be the perfect solution. However, it can still be used in conjunction with Western methods such as counseling, medication as well as physical and occupational therapy. In fact, based on preliminary military studies, it is found that the calming effect of yoga can help PTSD patients in dealing with conditions like hypervigilance, flashbacks, depression and anxiety. The studies also suggested that yoga can strengthen muscles and increase flexibility for veterans who suffered from traumatic amputations.

“There’s a natural resonance among our warriors with things with an Eastern ethos, with things that the samurai might have used. Yoga is something that our warriors will actively engage in: It’s a challenge and it has readily evident results,” explained Navy Capt. Robert Koffman, a physician and combat-stress expert. For the full story, do read it here.

OMG Yoga offers a variety of yoga classes in Singapore. Our private lessons are tailored and personalied to each individuals’ varying needs. For more details, do feel free to check our website.