When you walk into a yoga class, most of the time the majority of the students would be female. This brings about the common misconception that yoga is feminine. There are men out there who are concern about giving yoga a shot as they do not want to be associated with the word, “feminine”. However, as society starts to open up and understand things, there seems to be more men participating in the practice. 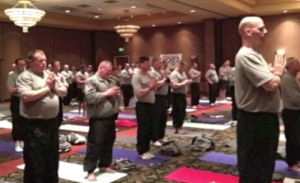 Just recently, a group of Newark firefighters claimed to build strength and de-stress with yoga workouts. In fact, for the past four weeks, 36 trainees have already been working on their sun salutations and warrior poses. This is all part of a new yoga initiative that was launched by the department. The whole aim of it is to keep firefighters calm and focused when they are battling blazes. As of now, the program is getting a thumbs up by the trainees. The department also has plans to expand the yoga program to all 600 firefighters in the coming months. “A lot of us underestimated what yoga could do. Once you start taking the class, you realize that you were sweating from just stretching and breathing and you realize that it encompasses using your whole body. When you’re doing firefighting, you’re in confined spaces and you have to contort your body and relax your body to go through small spaces, so with this, it teaches you about moving your body,” stated Courtney Benjamin, a 35-year-old participant of the yoga class, who admitted that he was skeptical before trying out yoga.

The yoga program initially came about from Fire Director Fateen Ziyad. He mentioned that he had been taking classes on his own for years now. Fateen then teamed up with instructor Debby Kaminsky, founder of the community program Newark Yoga Movement, in order to make it work. “I like to try new and innovative things. The reality of what a firefighter does is going from zero to 100 miles per hour. You’re laying in bed at 2 a.m., the alarm rings, you jump up and now you’re in a high-blaze fire saving somebody’s life. Yoga is one of those things that helps the body and mind handle that stress,” he explained. For more of the story, you can read it here.

If you are looking for yoga classes in Singapore, then you might want to check our website out. OMG Yoga recommends beginners to try Hatha Yoga first before venturing into other styles of yoga.