During this summer at the Livingston Public Library in the United States, Betty Larrea, a certified children’s yoga instructor, started the first ever annual Kids’ Yoga program. This program attracted an average of twenty children per session. The four-week program got local youths to come together and expand their minds and creativity through yoga. 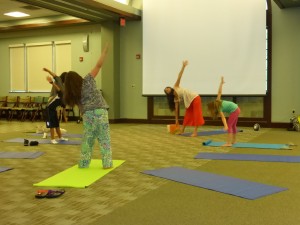 Initially, the program was only available for children in grades K-4. However, as the weeks progressed on, their parents also started to take part in the sessions with their child. Aside from that, infants as young as eight months old were invited to participate as well. Every week, Betty will incorporate both music and picture books. These tools act as a form of instrument to teach the children about breathing techniques, stretches and balance. By using a story as a guideline, Betty asked the kids to imagine how a certain character might look. From there, they will perform various actions accordingly. There are actually quite a number of books out there written intentionally with instructional yoga references. However, Betty still prefers free form stories such as Marion Dane Bauer’s “How Do I Love You?” as it enables greater imagination amongst the children.

The Librarians tend to expand their involvement in the community by providing new and exciting activities. After they heard positive feedback from the yoga programs in surrounding towns, the Livingston Librarians decided to give it a shot too. “Yoga is something that enables kids to be creative and express themselves. We knew people would be interested and since we’re more of a cultural center rather than a traditional library, we’re always looking for new and exciting things,” stated Youth Service Librarian Gina Vaccaro.

Betty has been teaching kids yoga for 13 years already. She explained that the main difference in yoga for adults and children is that in kids yoga, it is more about discovery first and poses later. She mentioned that once children are given the chance to express their creativity, they are not just connecting with themselves but also discovering new things about themselves too. “The connection of integrating the mind and the imagination is a holistic aspect that is already so natural to them. At the end there is a state of inner peace, being in their own space and finding a connection with themselves and that’s a beautiful thing,” she explained. For the rest of the story, you can read it here.

OMG Yoga offers a variety of yoga classes for you to choose from. Currently, we do not have any group classes for kids. However, if you would like a private yoga class for yourself or your family, we can definitely make arrangements for it.