Mark Giubarelli has been sharing and spreading his yoga knowledge around the United States, including Miami, Denver and Hawaii. Now, he is taking it a step further to the rich and famous in Hollywood. It is rather inspiring, considering that the Scot used to work at a fish and chip shop in the Highlands, before making the journey from Inverness to California. 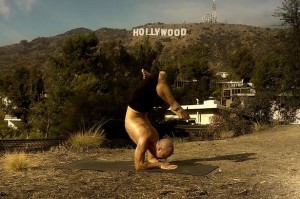 Mark mentioned that his background working in his family’s chippie back home helped to equip him well for his current career in LA-LA land. “It was a rough area of town and there was a constant influx of wild people who wandered into the shop. It was probably there that I learned good people skills,” stated the 37 year old, who was born to a close-knit Italian Catholic family in Inverness. After he turned nineteen, Mark made the move to Los Angeles, where he managed to get a job in the mortgage business. During this time, he had a private yoga instructor who encouraged him to teach as well.

Eventually Mark realised that the business world of Los Angeles just wasn’t suitable for him, so in 2001, he moved to Denver. That was where he started teaching yoga and shooting yoga videos. This was followed by television appearances and publications. From there, he went on to Hawaii for 3 years, Thailand for 9 months and Miami for 2 years. After finding out his dad was seriously ill, he returned back to Inverness, where he stayed and looked after his dad till he passed away in late 2012.

After the death of his dad, Mark returned back to the United States, but this time he ventured to Hollywood. Despite him being aware of the fierce competition there, he refused to be intimidated and persevered in his yoga movement. As of today, his classes are mostly packed with students and he also conducts private classes for celebrities. Despite his success, Mark has still managed to retain his down-to-earth quality. “I have taught many famous people. I am always forced to sign disclosures preventing me from speaking about it and I respect that. But sometimes, I don’t even know who the famous person is. The only reason I know they are somebody is because I have to sign the privacy disclosure,” said the Scot, who has no plans to return to Scotland any time soon, but is open-minded about the future. For the full story, you can read it here.

At OMG Yoga, we believe that our instructors are capable in assisting you in learning the art of yoga. Furthermore, our private yoga classes can be designed and tailored to your own needs.