Gisele Bundchen, the Brazilian super model, is promoting health and well-being once again. The photo below shows herself along with her 11-month-old daughter while they were doing yoga over the weekends. 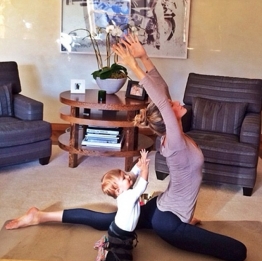 In the past, Gisele would share insight to her healthy lifestyle with photos taken during her yoga sessions along with baby Vivian. Since Vivian is just days from officially turning one year old, Gisele has been stepping up on her practice. Just on Saturday, the Victoria’s Secret model posted a photo of herself with arms outreached in a stretching position on the floor. Beside her was Vivian, who struck a similar but modified pose as her mum, as shown in the photo above. Instead of having her legs outstretched, the small child was seen kneeling beside her mother with her face pointed toward the ceiling.

Gisele posted the photo on Instagram and the cute photo managed to resonate with fans as it made its rounds on the Internet. In fact, there were quite a number of mummy bloggers who praised Gisele for promoting yoga as an exercise. “Start them young! Gisele Bundchen and baby daughter Vivian practice yoga moves together,” stated Yoga Web.

Back in October, Gisele also shared another photo of herself and Vivian during a yoga session. The 33-year-old model is well known for leading an active lifestyle and often maintains her workout regimes with her children around. That photo involved Gisele on the floor in a yoga pose while baby Vivian was propped up on pillows beside her. Gisele is a rather frequent user of Twitter and her posts tend to provide insight to the model’s busy life as well as how it revolves around work, motherhood and health. Aside from her daughter Vivian, Gisele and her husband, New England Patriots quarterback Tom Brady, have a three year old son named Benjamin. Tom also has another four year old son, John, from his previous relationship, who is currently under the care of both Gisele and Tom. For the full story, you can refer to it over here.

If you are looking for yoga classes in Singapore, do take a look at our website. OMG Yoga specialises in private yoga classes of different styles. We also conduct private classes for Prenatal Yoga, Postnatal Yoga as well as Baby Yoga. Hence, if you are looking for an activity that both you and your baby can participate in as well as lead lead a healthy lifestyle, then check out our classes.