Yoga to the People, a popular New York-based chain of yoga studios, has been accused by Bikram Yoga of copyright infringement for their Hot Yoga classes. Although there was a Copyright Office ruling that supported their position, the chain has decided to cease offering its high-temperature classes that are patterned after Bikram Yoga. According to a joint press release issued by both parties, the action is an attempt to settle a federal lawsuit filed by Bikram. 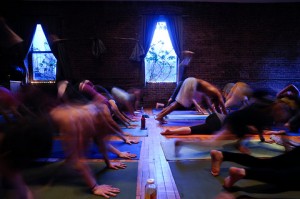 Greg Gumucio, founder of Yoga to the People, stated yesterday that he had no intention of withdrawing from the hot-yoga business. Yoga to the People is working on a new idea and sequence. They will still offer classes in a super-heated room and incorporate some poses from the sequence that was popularised by Bikram’s founder, Bikram Choudhury. At the same time, they will also include other poses as well. “The idea is to create something new,” explained Greg.

Yoga to the People has managed to attract many students because of their lower pricing. Their six studios in New York charge a flat rate of US$8 per class as compared to the US$25 fee at those of the Bikram studios. Regardless, Yoga to the People has agreed to stop using the Bikram sequence by 15th February. Bikram’s numerous suits against their imitators has led to their reputation being affected. Many criticise them for their claims that yoga postures, which have already been around for thousands of years, could be of anyone’s property.

The current suit charged that the sequence of 26 postures and two breathing exercises, performed in a room heated to 105 degrees, were formulated by Bikram himself, making it his intellectual property, which Greg, his former student, stole from him. However, in June, the federal copyright office ruled that arrangements of preexisting exercises such as those of yoga poses, could not be copyrighted.

Citing a 2005 case in which Bikram was defending his copyright, which he obtained in 2003, the copyright office wrote: While such a functional system or process may be aesthetically appealing, it is nevertheless uncopyrightable subject matter. A film or description of such an exercise routine or simple dance routine may be copyrightable, as may a compilation of photographs of such movements. However, such a copyright will not extend to the movements themselves, either individually or in combination, but only to the expressive description, depiction, or illustration of the routine … Nonetheless, Greg has decided not to offer courses patterned after Bikram as he no longer felt the need to be entangled in the Bikram battle.

If you are looking for Yoga Classes in Singapore, don’t forget to check out OMG Yoga. We do not offer Bikram Yoga presently, but we do have a whole range of other styles for you to choose from.