Last year in June, 16-year-old Jennifer Ziel was on the lookout for a form of exercise she can take up during her free time in the summer. During that time of the year, her school sports had already been over. Furthermore, it was way too hot for her to take a run outdoors. This made her turned to something that she had never tried before — yoga. Little did she know, that her decision was the first step leading to her competing against the best in the country. 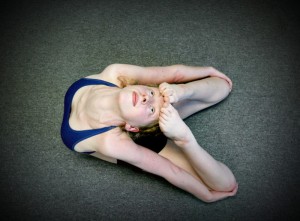 Currently, the resident from North Andover is part of the grueling sport of competitive yoga. After placing at the regional championships last month, she will be heading over to New York City in March to compete in the National Championships. “I didn’t even know there was competitive yoga when I first started,” she stated. When Jennifer first started out yoga, she wasn’t even sure if she would be able to keep up with the beginners, let alone compete.

Once, Jennifer chanced upon a competitor performing a pose known as the guillotine. In this pose, the person bends backward while moving their hands behind their thighs. They continue to do so until their head eventually emerges through their legs. When she saw it for the very first time, she didn’t believe there was a chance she could pull it off. “I saw a picture of it and I didn’t understand how it was possible for someone to do that,” she explained. However, with the flexibility she had from her previous exposure to dance and gymnastics, it took her only a couple of weeks before she pulled it off.

Competitive yoga first originated in India. Since the inception, it has been practiced for more than 1,000 years. However, it has taken off in the past decade. Just like in gymnastics, each competitor has a routine and will be judged on how well they are able to execute it. The routine also has to match specific baselines and be at least three minutes long. Some of the other judging criteria include style, gracefulness and movement. If a competitor fails to hold their poses steady or if they were to face the wrong way, points will be deducted. For the full story, you can check it out here.

Currently in Singapore, competitive yoga has yet to emerge. However, it could very well be known in future. At OMG Yoga, we only offer certified yoga instructors to assist you in your yoga journey. Don’t forget to check out our Group Yoga Classes!