Before we begin today’s post, OMG Yoga would like to wish everyone a Merry Christmas! It’s the season to be jolly and to spread the love to your family and loved ones. If for somehow you have no clue on how to start, perhaps you can learn from our friends in Hanoi, Vietnam. More than two hundred of them dressed up in the Santa Claus suit started laughing out loud to celebrate Christmas. 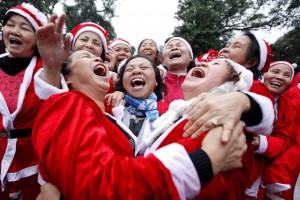 This cheerful event took place on Sunday and it comprises mostly of members of a laughing yoga club in Hanoi as well as the elderly. All of them got up early in the morning and gathered at Ly Thai To Park to join the event known as “Noel Smile 2012”. This event started off at 6am in the morning and lasted for a total of 90 minutes till 7:30am. The whole point of the event was to convey the message of what Vietnam is popularly known as, which is the land of smiles.

Laughter Yoga was first introduced to Hanoi by Le Anh Son, who is also the current president of Ly Thai To Laughing Yoga club. When he was in Bangalore, India, he went for a training course. Upon his return to the capital city, he has effectively succeeded in making Laughter Yoga a special morning exercise for Hanoians. Currently, majority of the members are the elderly. However, Laughter Yoga is a form of exercise that is suitable for all ages and health conditions as “laughter is always the best form of medicine” as it is known by many.

Many individuals are actually unaware of the benefits that Laughter Yoga can bring. Some even feel that there is simply no need for such an exercise as it is totally irrelevant. The truth is that Laughter Yoga assists individuals in relieving stress. Aside from that, it can also bring about a serene feeling, enabling one to relax more easily. Through this, one would be able to stop and enjoy the simple pleasures of what life has to offer on a daily basis. One of the ultimate aims of Laughter Yoga is to put a peaceful smile on participants. For Ta Duy Anh, a 23 year old victim of Agent Orange (AO), Laughter Yoga aids to bring him closer to real life. At the same time, it also help him to avoid inferiority complex about his disability.

Unfortunately, OMG Yoga does not offer Laughter Yoga in Singapore yet. However, we do have other Private Yoga Classes to share with you this festive season.