Nearly three decades ago, Glynis Barber was an actress who appeared in Dempsey and Makepeace, the hit Eighties crime series. She played Lady Harriet Makepeace, an aristocratic police sergeant in the popular ITV drama. Along with her was American Michael Brandon, who acted as Lt James Dempsey, her streetwise sidekick. Today, at the age of 57, she credits yoga for enabling her to stay young and supple in her body. 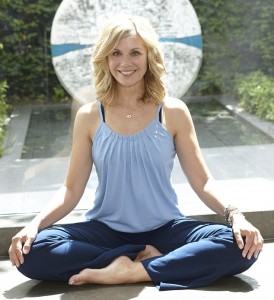 Glynis mentioned that she first began doing yoga back in 1984 when she was cast on the show. The main reason was to maintain both her fitness and health as she could not afford to miss any filming sessions due to illness. She revealed that yoga was her secret to keeping her youth till to date. This drove her to launch her own Yoga Secrets DVD, which she collaborated with Howard Napper, an instructor. “It’s very strengthening and incredible for flexibility. There’s nothing more ageing than being stiff. I’ve been in classes with women much younger than me who are creaking and moaning and they look 90 years old. If you’re flexible and can move your joints freely, it’s very youth-making. Exercise is the closest thing to an anti-ageing pill. I put the way I look down to exercise – above nutrition and expensive creams,” she explained.

With regular yoga practice, Glynis does not fear ageing. In fact, she claims that the best years of a woman’s life are during her 40s and 50s. She went on to state that men will need to catch up if not they might lose their wives. “I have never felt as energetic as I do now. By the time we’ve come through the menopause, we emerge with so much creativity and energy – it’s amazing how so many women change their career after the menopause or even leave their husbands. By our 50s we’ve reached a different stage and if our husbands aren’t keeping up with us then the marriage can’t survive,” she added.

Aside from yoga, Glynis also practices having a healthy organic diet. She actually converted to organic eating alongside Prince Charles during the early stages. “While everyone was chastising him for hugging a tree, I was his little supporter in the background yelling, Come on, let’s get this out there,” she said. If you would like to read further, click here.

Looking to maintain a good diet and your youth during this festive period? Then, perhaps you should give yoga a go too! OMG Yoga offers a variety of yoga classes in Singapore to cater to everyone’s needs.