A Well-Rounded Approach to Yoga

Tiina Veer was the average student who went to a university and graduated with a degree. Following that, she went on to the corporate world and got a job in her field of study. However, after several years into her career, she realised that she wasn’t happy with it. This led her on a soul search to find out what she truly wanted to do in life. She decided that she had to find something of greater meaning, even at the expense of a pay cut. 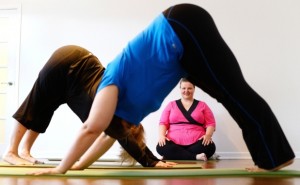 Eventually, the 45-year-old from Toronto realised that massage therapy was what she truly wanted to do. “I had my ‘a-ha’ moment. For years, people were always asking me for massages, that I was good at it and it was something I loved to do, so I went back to school to get my licence,” stated the outgoing and bubbly Tiina. Unfortunately, after a few years in the field, she started to suffer from “repetitive strain”, which is a common condition for individuals who tend to work a lot with their hands. This led her in search of a yoga class to help her cope with the condition.

Her search for the right teacher and class took more than a year. Even she herself was surprised by the amount of time it took, considering that Toronto is a pretty big city. However, once she became a regular practitioner of yoga, she knew she wanted more out of it. “I fell deeply in love yoga and how it made me feel,” she said. The thing about Tiina is that she does not have your typical “yoga body”. In fact, she proclaims herself to be rounder than the average yogi.

Even though yoga was quite a challenge for someone of her body type, she came to a decision to become a trained yoga instructor. She even chose the 700 hours of teacher training over the standard 200 hours. “Women, myself included, can feel pretty intimidated walking into a fitness class of any kind, especially yoga. That’s where the idea of Yoga for Round Bodies was born,” she explained. Tiina, who admitted to be overweight her entire life, has never allowed her size to stop her from achieving what she sets her mind to. Now, she has finally found what she has been searching for over the years. Her idea of having a career filled with more meaning has finally surfaced. For the rest of the story, do refer here.

If you are looking for yoga classes in Singapore, then look no further. OMG Yoga offers a variety of yoga class, catering to different age, level and body types. As long as you have a desire to learn, you will definitely be able to obtain the benefits of yoga.