A new study displays that a specific yoga program can improve pelvic health as well as reduce mental stress for the women who suffer from some form of urinary incontinence. The researchers from University California, San Francisco recently found a yoga training program that can assist women to gain more control over their urination and also avoid accidental urine leakage. 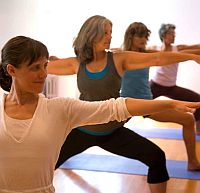 The study has also been published in the official journal of the American Urogynecologic Society, Female Pelvic Medicine & Reconstructive Surgery. “Yoga is often directed at mindful awareness, increasing relaxation, and relieving anxiety and stress. For these reasons, yoga has been directed at a variety of other conditions — metabolic syndrome or pain syndromes — but there’s also a reason to think that it could help for incontinence as well,” stated first author Alison Huang, M.D., assistant professor in the UCSF School of Medicine.

Alison along with her colleagues, recruited twenty women from the Bay Area who were 40 years and above and who suffered from urinary incontinence on a daily basis. They were divided into two separate groups. The first half was assigned to take part in a six-week yoga therapy class, while the other half were not. For the ones in the yoga group, they experienced an overall 70% reduction in the frequency of their urine leakage as compared to the baseline, which is considered to be quite a significant improvement. As for the control group, who were not involved in yoga, they had a slight 13% improvement.

Majority of the observed improvement in incontinence was stress related or urine leakage brought upon by activities that increases abdominal pressure such as coughing, sneezing, and bending over. Alison and her colleagues believe that yoga has the ability to improve urinary incontinence through more than one mechanism. Since incontinence is related with anxiety and depression, women suffering from it will be able to benefit from yoga’s emphasis on mindful meditation and relaxation. Apart from that, by having regular yoga practice, it might also help women to strengthen the muscles of their pelvic floor that support the bladder and protect against incontinence. “We thought this would be a good opportunity for women to use yoga to become more aware of and have more control over their pelvic floor muscles,” added Alison. For more of the story, do check it here.

If you are keen to take up yoga classes in Singapore, do take a look at what we have to offer. OMG Yoga specialises in private yoga classes, catering to each individuals’ own requirements.