Imagine having to wait in an airport for a couple of hours just for a connecting flight. Worse still, imagine that your flight has been delayed for an indefinite amount of time. When being stuck in such a helpless situation, one can’t help but feel stressed out and pretty much lost. This is probably one of the reasons why some airports are adding tranquil spots where individuals can stretch, meditate, relax and unwind from whatsoever stress that they may be facing. 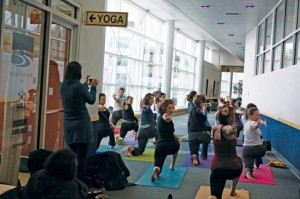 At the same time, these yoga rooms at airports is one of the latest effort to humanize and de-stress the unpleasantness of air travel. Burlington, Vermont in the United States is the latest airport to support and add this idea. “We find that traveling can be stressful, so we try to take a little bit of that out,” stated Eugene Richards, interim director of the Burlington International Airport.

So far, this small but light and airy space place with mossy green walls, bamboo floor and yoga mats has turned into a sanctuary for travellers who are waiting for their flights or when they have been stranded. “You saved the day for our 7-month old baby,” wrote a young family in a journal log after they discovered the space upon missing their flight to Japan due to bad weather.

Aside from Burlington, airports in San Francisco and Dallas have also opened yoga rooms as of last year. These dedicated rooms enables travellers to have the luxury of relaxing and stretching, away from busy terminals and food courts. One of the aims of this amenity is to give the airport an edge in order to attract travellers to return. According to Eugene, in the Burlington airport, free carts, free Wi-Fi, a yoga room, local food and rocking chairs are being offered. “Burlington’s a little different, and this kind of goes along with that,” he mentioned.

Although there were rather positive feedback with regards to the yoga room, there were still some travellers who were were perplexed and even amused as they walked past the new space. “Yoga at the airport? I just thought it was odd,” said Charlene Allis of Winooski, Vt., as she and her husband, Bruce, returned from Florida. If you would like to read the full article, you can do so here.

Currently in Singapore, we do not have a yoga room yet. However, there are still many locations where you can practice and learn at. Just take a look at OMG Yoga. Our private yoga class promotion is still on and will end this coming Thursday, so do check us out!