According to an Oxford University study, yoga has the capability of improving the mood as well as mental well being of prisoners. Researchers are looking forward to figure out if a ten-week yoga course trial, run by the Prison Phoenix Trust charity, would be able to ease aggression and antisocial behaviour in prisoners. 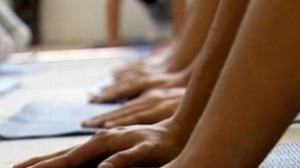 Based on what Dr Amy Bilderbeck has mentioned, yoga could “possibly aid in managing the burden of mental health problems in prisons”. Inmates from the West Midlands’ category B and C prisons, a women’s prison and a young offender institution took part in the study. The team from Oxford University’s Departments of Experimental Psychology and Psychiatry measured their mood, stress, impulsivity and mental wellbeing in comparison to the rest of the prisoners.

“We found that the group that did the yoga course showed an improvement in positive mood, a decrease in stress and greater accuracy in a computer test of impulsivity and attention. Offering yoga sessions in prisons is cheap, much cheaper than other mental health interventions. If it has any effect on addressing mental health problems in prisons, it could save significant amounts of public money,” explained Dr Amy.

However, she also went on to caution that yoga does not necessarily have an instant effect. She mentioned that yoga lessons would not “suddenly turn prisons into calm and serene places, stop all aggression and reduce reoffending rates”. Just like any other form of therapy that is available out there, it will require time along with the cooperation of the inmate. There is no specific time frame given at the moment as such therapy usually relies significantly on each individual. There is also no guarantee that it would work on every single individual. It can vary based on the inmate’s character, personality and willingness to change. If the inmate refuses to change for the better to begin with, then he/she might not be able to even reap any of the benefits yoga that have to offer.

“Yoga and meditation helps them feel better, make better decisions and develop the capacity to think before acting – all essential in leading positive, crime-free lives once back in the community,” said Sam Settle, director of the Oxford-based Prison Phoenix Trust. For the full story, you can refer here.

At OMG Yoga, we provide a variety of yoga classes in Singapore. If you would like to take a look on what we have to offer, kindly check out our website.