From Hijacker to Owner of Yoga Studio

Frank Iszak is a Hungarian native who spent the first 25 years of his life living under an oppressive Soviet-run communist regime. In 1956, he even risked his life when he and six others took part in an operation to hijack a plane and fly it to freedom. However, things have changed since then. The 81 year old now runs his own yoga studio in the United States. In fact, his not for profit organisation, Silver Age Yoga, has been offering free, specialised yoga class for the senior citizens ever since 2003. 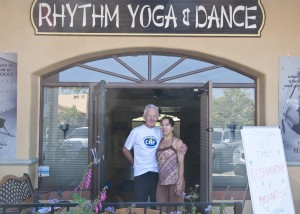 “I owe that to this country, because it’s a privilege to have been accepted into the free world. That’s my way of reciprocating. I never got paid for it and I put in a lot of money and a lot of time, but it’s worth it to bring smiles to faces that seldom crack a smile,” stated Frank. Before building up his own yoga business, Frank has been very successful in his other careers too, from being a reporter to a chemical engineer to owning his own businesses. He also taught martial arts for thirty years while working as a private investigator, which he still occasionally does.

Despite all of the available options he had, Frank still chose to pursue his yoga business because of his strong passion for it. Just three months back, along with Serpil, his 56 year old wife, they opened Rhythm Yoga & Dance , which offers zumba and yoga-inspired dance courses in addition to yoga. Both Frank and Serpil have been teaching yoga and Pilates together for the past 20 years.

Sadly, just a year and a half ago, Frank was diagnosed with Parkinson’s disease. Not many would be able to picture that after seeing all of the yoga poses that he is capable of pulling off. He did admit that the communication between his muscles and brain is not as good as before. Nonetheless, he still strongly believes that yoga has aid in stall the process. “The muscles have their own memory, and that brain communication perhaps is less as effected than it would be if I didn’t practice yoga. When you keep moving the body, the body remembers,” explained Frank. For the full article, you can read it here.

At OMG Yoga, we believe that there is a style of yoga for every Singaporean. If you find a style unfitting for you, do not give up on yoga entirely. Instead, try a different style and it might provide you with an entirely different opinion. Check our website for more details!