Nope, your eyes aren’t playing any tricks on you. Flying yoga, you got that right! Believe it or not, such a style of yoga actually does exist. Flying yoga is also known as acroyoga, partner yoga and sometimes, even circus yoga. The thing that separates this style of yoga from that of others is that it requires two people before it can be performed. One person will take the base position, while the other will be the flier. 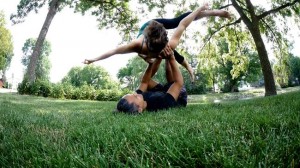 The most basic posture is for the base partner to lay down on his or her back and settle his feet into the hips of the flier, who will be standing. Then while he lifts and straightens his legs into a 90-degree angle and uses his arms to pull, the base partner will hoist the flier into the air. Most people would have already known this position if they were ever given an “airplane ride” when they were a child. For the base partners, they are required to have good stability, strength and balance. On the other hand, fliers would have to learn how to use gravity to lengthen and deepen their poses. They would also need to develop confidence in their partner. “Flying yoga, which is an amazing playful practice, is between two people really balancing each other, learning how to work on trust, communication and having a sense of complete surrender, being able to be supported and surrendering into each pose,” explained Whaka Luke.

For Sara and Whaka, their flying yoga practice consists of traditional yoga, acrobatics and Thai massage. Their aim is to bring out the inner child and playfulness from their students. They believe that both the base partner and the flier will be able to benefit from the practice. The base partner will be able to increase their strength through regular practice. As for the flier, their flexibility and openness will be enhanced. Both partners will also be able to cooperate and work as a team, forming a strong bond eventually. “To actually be in the (flying) experience – that feeling of weightlessness, that feeling of being inverted and having gravity as your friend instead of being this force that’s always pulling you down. All of a sudden, it becomes this force that’s helping you expand and grow,” stated Whaka. The rest of the article can be read from here.

This concept and style of yoga has yet to be brought to Singapore. However, OMG Yoga has many other forms of yoga to offer Singaporeans. To learn more about our school, check us out at our website!