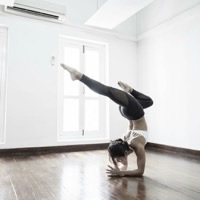 In 2005, Yoshie moved to Hong Kong and started her first Teacher Training. She completed it in 2006 as a certified and registered Yoga Alliance Teacher (RYT-200). After that, she started to practice Anusara Yoga with Patrick Creelman till she left Hong Kong in 2010.

In 2007, Yoshie joined “Yoga for Life” as a private teacher and worked there till 2010. Even during her pregnancy in 2008, she continued to teach beginners, pregnant ladies and others in Hong Kong. In 2010, Yoshie moved to Tokyo and carried on teaching yoga to the city people. In 2014, she returned to Singapore again and started to teach both in English and Japanese.

She has also completed the 100 hour Advanced Teacher Training with Patrick Creelman in 2016. Yoshie’s goal as a teacher is to empower students to believe in and think for themselves.