Yoga After 3 Hours of Hiking

After a 3,500 metre climb and three hours of hiking, most people would be drained and in need of a good rest. Well, Martina Cufar is definitely not one of those people. The Slovenian climber felt that she still had sufficient energy to perform her yoga routine even after the long climb up Mont Blanc. Somehow, she managed to find a remote corner in the Alps, which was just right in front of a stunning landscape too. 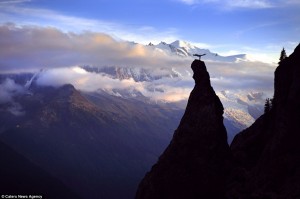 The photographer of the photos was Lukasz Warzecha, who is an adventurer himself. In fact, he was the one who persuaded Martina to join him in the French Alps for the stunning photo shoot. Both of them, along with Lukasz’s assistant and a mountain guide, managed to scale the huge peaks on both sides of a valley near Chamonix, France, in just a single day.

They started things off in the morning by climbing 3,500 metres up the Aiguille du Midi mountain before abseiling down 200 metres to reach a ridge known as Arete des Comsmiques. In the afternoon Lukasz and his team finally made it to the other side of the valley. The hike lasted close to about three hours before they finally reach a rock known as a ‘tower’ formation called the Aiguillette d’Argentiere. As for Martina, she had to scale up a 50 metre-high tower to get into the position of a two-metre-square top, which was situated against the backdrop of an amazing sunset over the Mount Blanc Massif. Once she reached the top, she had to gain her balance before performing the yoga poses.

According to Lukasz, his idea of bringing about the majestic beauty of the mountains and yoga derived when he saw a picture Martina had posted on her blog. “Martina is an extremely good climber and has very good balance and she had started using yoga to improve her focus for climbing and outside the sport. I said to her this is something we have to do better and bring yoga and the mountains together, we actually ended up doing the shoot for an American magazine called the Yoga Journal. We did the whole shoot in one day, both sides of the valley up some mountains which are around 3,500 metres on both sides so it was pretty tough. We were there in September time, so the mountains are off-season and it is a lot more quiet and thankfully the winter hasn’t arrived yet,” he said. You can read more here.

If you are looking for either private or group yoga classes in Singapore, do take a look at what we at OMG Yoga Singapore have to offer.